Stubbornly high unemployment rates, especially in South Side and West Side communities, have pushed many Chicagoans into the informal economy.

Long before the coronavirus outbreak shuttered businesses and locked down much of the US economy, and before the vulnerabilities within the economic system were laid bare by the pandemic, countless Chicagoans were living on the edge.

Reliance on low-wage jobs has deepened in recent decades, which is why the media and policymakers remind us so often that many households are “one paycheck away” from devastating financial hardship. Some, though, do not even have that paycheck. They are earning a living in the informal economy, or through temporary jobs, or as gig workers. Even during boom times, vast survival economies support an untold number of Chicagoans. During economic downturns, however, the number of households relying on nonstandard work becomes inconceivable.

In December 2019, the official unemployment rate in the Chicago metropolitan area fell to just 2.8 percent, declining from 12.1 percent over the course of a decade. But this impressive statistic masked a second trend: persistently high unemployment among African Americans. Illinois had the highest Black unemployment rate in the nation. The Chicago metropolitan area was one of the most unequal in terms of Black-White rates of unemployment, and levels of African-American unemployment in the region had changed little during what until then had been the longest economic expansion in US history. In fact, between 2010 and 2017, “black unemployment fell just .4 percent to 17.2percent, by far the highest among racial and ethnic groups.” To make matters worse, official unemployment figures had been undercounting the extent of joblessness because they fail to capture discouraged workers who have given up applying for jobs. Well before COVID-19 infections soared, it was no exaggeration to say that many predominantly Black neighborhoods across the Chicago area were in the grips of a several decades-long unemployment crisis.

Living in neighborhoods that have been hollowed out by deindustrialization, inadequate investment, and economic development programs delivering too few jobs and business opportunities, many residents have turned to the informal economy to make ends meet. Working“off the books” as street vendors, childcare providers, auto mechanics, movers, and range of other activities, including participating in the drug trade, growing numbers of African Americans who are unable to find standard employment are relying the city’s burgeoning survival economies.

Despite the prevalence of economic informality in Chicago, there has not been a systematic analysis of this phenomenon. This report seeks to remedy the absence of actionable information by researching the relationship between unemployment and informality. To better understand how economic informality functions as a survival strategy, Equity and Transformation (EAT) collaborated with the UIC Center for Urban Economic Development (CUED) to survey participants in the informal economy on Chicago’s West Side. In total, 56 surveys, 35men and 21 women, were conducted on a single day in August 2019. Survey data were supplemented by in-depth inter-views conducted in January 2020 with ten Chicagoans who are actively participating in the informal economy.

For years, a large, unsanctioned, open-air market has operated on Chicago’s West Side. An array of goods and services — both licit and illicit — is on offer, seven days a week, every week of the year. Food, clothing, household items, cigarettes, movies and compact discs, street drugs, and various services can be procured right on the sidewalk, often at prices well below those found in commercial businesses.

Informality, in other words, is part of the “regular” economy of certain neighborhoods, and it is through the growing number of informal operators that the demand for low-cost goods and services is met. In areas struggling with persistently high unemployment rates, as well as concentrated poverty and other social ills, the informal economy fills two crucial functions: it provides employment and income for residents while also meeting consumer demand.

67% of respondents reported that in the previous two months they did not earn enough to pay all of their bills.

When asked which activities they had engaged in during the previous year, respondents identified a similar list of informal jobs. The most common were: housecleaning (52%), selling loose cigarettes (38%), washing cars (35%), doing yard work (35%),taking care of the elderly (34%), working asa handyman (34%), babysitting (32%), selling food (30%), working as a mover (30%), and selling personal-care items (30%). In addition, 27 percent of respondents had engaged in the following activities during the past year: selling CDs and DVDs, recycling, and selling clothing. 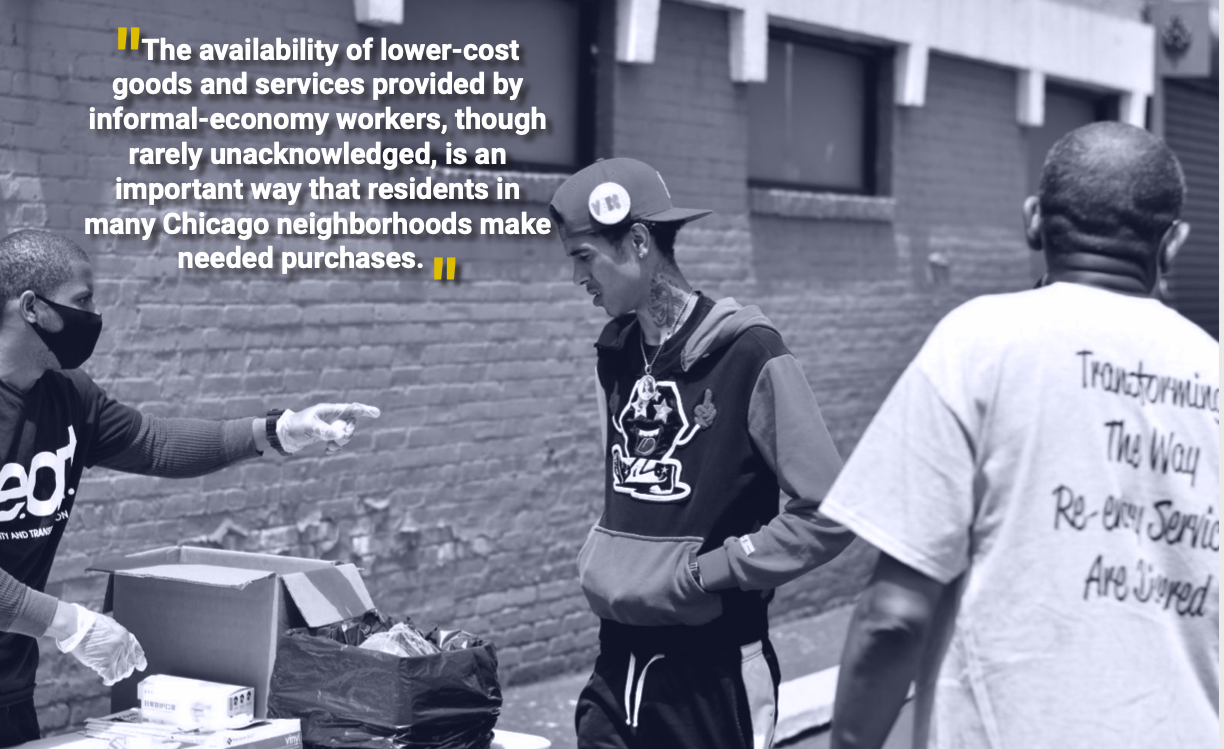